The University of North Carolina at Chapel Hill
If your ONYEN login is not working on Stay Active, please email recevents@unc.edu with your name, PID and ONYEN. Learn More 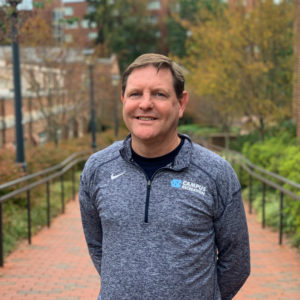 Jason is originally from the mountains of North Carolina, but spent much of his youth in Mount Pleasant, S.C. He graduated from the UNC – Chapel Hill in 1996 with a B.A. in English and completed his Master’s Degree in Sport Management from Appalachian State University in 2002. Upon graduation, Jason moved to Greeley, Colorado, where he was the assistant director of intramural and club sports at the University of Northern Colorado. He returned to his alma mater in 2007 as the director of sport clubs.   Jason currently resides in Chapel Hill with his wife, Trish, and son, Jackson.  He enjoys reading, cooking, playing basketball and attending UNC athletic events.